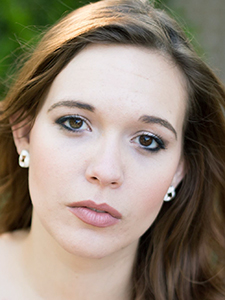 Brittany Jones, soprano, is a graduate student in vocal performance and a native of Louisville, Kentucky.  She holds bachelor’s degrees in biology, music, and voice from Bellarmine University and The University of Kentucky. A singer of only four years, she is highly accomplished in opera, recitals, and musical theatre. Her achievements include the Gail Robinson Musicianship Award, 1st place Alltech Transfer Award, and 1st place NATS Intermediate Award. Brittany’s accomplishments also include the title role in Suor Angelica, Susan B. Anthony in The Mother of Us All, Giulietta in Les contes d’Hoffmann, Donna Elvira in Don Giovanni, Beggar Woman in Sweeney Todd, and Factory Girl in Les Misérables. She recently traveled to Germany singing Strauss art songs for critically acclaimed accompanists Julius Drake and Helmut Deutsch, as well as European opera stars Falko Hönisch, Emilio Pons, Elena Gorshnova, and many others. She has toured as a soprano in The Schola Cantorum of Bellarmine University in Rome, Vatican City, Florence, Naples, and Amalfi. Brittany is currently a student of Dr. Stephen Austin and is recipient of the Teddy and Barbara Coe opera scholarship and Dr. J. Charles Groom Memorial voice scholarship. Her next role will be the title role in Madama Butterfly with UNT in January