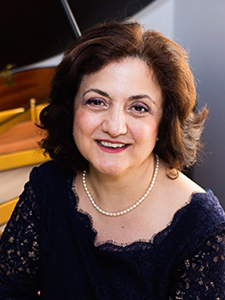 Ida has performed in several national and International festivals such as Song Collaborators Consortia in Baton Rouge Louisiana, Skaneateles Festival, in Skaneateles NY., Trinity Concert Series in Watertown NY, Clayton Opera House Series and most recently at North Carolina Bach Festival, in Raleigh NC, She has collaborated with several distinguished artists in the US and Europe such as members of Takacs, Cassatt, Jefferson and Lark quartets, as well as members of Athens Philharmonic in Greece, Thessaloniki Philharmonic Orchestra, RAI National Orchestra etc.

Invited by the Italian Federation of Women of Professions, Arts and Affairs, the Universities of Torino and Ancona, and “Friends of Firenze Society” she has performed recitals in Ancona, Torino and Florence, Italy. Ida made her New York City debut in 2001 at the Merkin Hall at Kaufman Music Center and continues to play in the city regularly in venues such as the TENRI Cultural Institute, the Victor Borge Hall at the Scandinavian House and the Symphony Space. A frequent chamber music performer with Symphoria musicians, former Syracuse Symphony Orchestra, Ida also performs with Society for New Music, new works commissioned by SNM.

Ida is the co-founder of “Forty -Fingers” Piano Quartet, “AMIDA” Piano-Duo, and St. Peters Cazenovia Concert Series. She performs regularly with these groups in the Central New York area.

Ida accepted a SAMMY award on behalf of Society for New Music for the Inova label CD recording of “Music Here and Now’ where she was a performer.