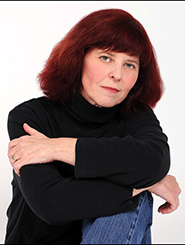 American art song composer Juliana Hall (b. 1958) is a prolific and highly-regarded composer of vocal music, whose songs have been described as "brilliant" (Washington Post), "beguiling" (Times of London), and "the most genuinely moving music of the afternoon" (Boston Globe). The NATS Journal of Singing wrote that "Hall's text setting is spot on and exquisite", and Voix des Arts noted that Hall "perpetuates the American Art Song tradition of Beach, Barber, and Bolcom with music of ingenuity and integrity."

Hall began formal studies in composition as a 26-year-old graduate student majoring in piano performance at the Yale School of Music. Despite studying composition only as an elective, her teachers - Martin Bresnick, Leon Kirchner, and Frederic Rzewski - encouraged her to change careers after hearing the art songs she was composing, and in 1987 she received her Master's degree in Composition.

In 1989 Hall was awarded a Guggenheim Fellowship in Music Composition, and since that time her works have been heard in 29 countries on six continents, at venues including Carnegie Hall's Weill Recital Hall, the Library of Congress, Théâtre du Châtelet, and Wigmore Hall, as well as the London Festival of American Music, Norfolk Chamber Music Festival, Ojai Festival, and Tanglewood Music Center. Her music has also been presented on the Joy in Singing's "Edward T. Cone Composers Concert" at New York's Lincoln Center and in a Holy Week meditation service at London's St. Paul's Cathedral.

In addition to concert venues, Hall's music has been studied and performed by voice and piano students of all levels at nearly 100 schools across the U.S., including the Bard College Conservatory, Cincinnati College-Conservatory, Eastman School, Hartt School, Indiana University, Juilliard School, Longy School, Peabody Institute, and Westminster Choir College, as well as at schools abroad such as the Conservatorio di Musica F. A. Bonporti (Italy), Fontys Conservatorium (Netherlands), Guildhall School (England), Royal College of Music (England), and the Royal Conservatoire (Scotland).

Hall's art songs have been broadcast over the BBC and NPR radio networks, as well as classical radio stations worldwide, including WQXR New York and WGBH Boston. Her songs and vocal chamber music works are published by E. C. Schirmer and Boosey & Hawkes, and on CD they have been issued on the Albany and Vienna Modern Masters record labels. Her first solo CD - "Love's Signature" - was released in 2017 on the MSR Classics label, featuring the renowned countertenor Darryl Taylor with Hall at the piano, and Grammy-winning soprano Susan Narucki performing with pianist Donald Berman. Gramophone Magazine wrote of the recording that "[Hall's] sensitivity to words is on impressive display...these songs show Hall to be a composer who savours lyrical lines and harmonies peppered with gentle spices" and the NATS Journal of Singing remarked that "One comes away from this disc with a profound appreciation for the excellence and innovation of [Hall's] music," adding that her songs are "meticulously and sensitively crafted...music whose beauty could enhance the text at hand without drawing attention away from that text. This is masterful writing in every respect."