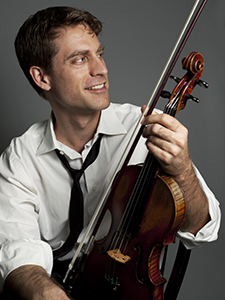 An avid performer of both chamber and solo music, Alex Russell has given chamber music recitals in a dozen countries across four continents and has performed with orchestras in Sweden, Lithuania, Ukraine, Armenia, South Korea, Canada, and throughout the U.S. He has performed on numerous occasions on local, national, and international radio and television broadcasts, and, as a recording artist, has produced six full-length albums, selling over fifteen thousand copies to date. He is very committed to teaching: he is Assistant Professor at the College of Music and the Arts at Azusa Pacific University and has given masterclasses around the world at music schools and conservatories.

Russell holds a Bachelor’s degree from APU, a Masters from the Cleveland Institute of Music, and a Doctorate of Musical Arts from the University of Southern California, all in violin performance. He performs on an 1865 Auguste Sebastien Philippe Bernardel violin.