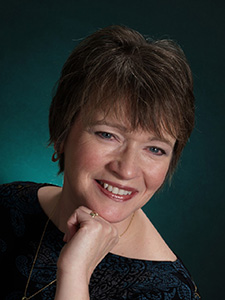 Soprano Janet Brown has been praised by critics for her warm, clear voice and direct expression.  Richard Dyer of the Boston Globe has called her “….one of our most treasurable artists.”    Ms. Brown is equally at home on the concert and operatic stages.  She has performed roles with the Syracuse Opera Company, the American Repertory Theatre, the Boston Early Music Festival and the Pepsico Summerfare music festival.  On the concert stage she has performed the major oratorio roles with the Syracuse Symphony, the West Virginia Symphony, the Cantata Singers of Boston, the Spectrum Singers of Boston, the New England Bach Festival, the Northwest Bach Festival, Handel & Haydn Society, Emmanuel Music of Boston, the Tallahassee Symphony, the Albuquerque Symphony,   and the Wichita Symphony, to name a few.  Ms. Brown is also a frequent recitalist with the Skaneateles Chamber Music Festival and has appeared in concerts of new music with the Syracuse-based Society for New Music, and Boston’s Collage New Music. Janet Brown has premiered works by composers Gunther Schuller, Andrew Imbrie, Philip Glass, Nicolas Scherzinger, Edward Cohen, Howard Boatwright, Robert Moran and Ernst Bacon.  In addition to her critically acclaimed CD release of selections from Spanisches Liederbuch of Hugo Wolf, she can be heard on a recording entitled "Fond Affection: Music of Ernst Bacon”, available through the Ernst Bacon Society.   Janet Brown received her Bachelor of Music from the Crane School of Music, SUNY Potsdam, and her Master of Music from Syracuse University. Ms. Brown is an Associate Teaching Professor in Voice and Diction at the Setnor School of Music, Syracuse University