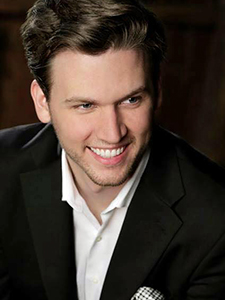 Mason Jarboe, baritone, is a senior vocal performance major at the University of North Texas studying under professor Molly Fillmore. He was most recently seen at Opera in the Ozarks, where he reprised the title role of Don Giovanni, in which he possessed “…a strong command of how to make an Italian line flow, and he exhibited beauty at every volume level. Mark my words: It won’t be Jarboe’s last Giovanni” (Arkansas Times). With Opera in the Ozarks, Mr. Jarboe has performed the roles of Tonio in Pagliacci and Michele in Il Tabarro. In the 2015-2016 season, Mason was an education outreach young artist at The Dallas Opera, where he sang the role of Colas in Mozart’s Bastien and Bastienne under the baton of Peter Manning, acting concertmaster of the Royal Opera at Covent Garden, as well as Maestro Paolo Bressan. He also debuted the title role of Don Giovanni at UNT and the role of Donner in a concert production of Das Rheingold at the Opera Company of Brooklyn. After making his professional debut at the age of 19 with Fort Worth Opera as the French Sentry in Kevin Puts’ Pulitzer-winning opera Silent Night, he was a young artist at the  Seagle Music Colony in  the 2014 and 2015 seasons.  Performance highlights include Sir Sagramore in Camelot, Haly in l’Italiana in Algeri, Pistola in Falstaff, and Grantaire in Les Misérables. With UNT Opera Mason has performed the roles of Pandolfe in Massenet’s Cendrillon, Betto in Gianni Schicchi, the villains Lindorf and Miracle in Les contes d’Hoffmann,  as well as  covering the role of  Bartolo in Il barbiere di Siviglia  and Coppelius/Dapertutto in Les contes d’Hoffmann. On the concert stage, Mason was most recently been seen as Adam in Haydn’s Creation with the UNT Symphony Orchestra and Grand Chorus. Before that, he was the bass soloist on the rarely performed Stravinsky masterwork Les Noces as the only student soloist among three faculty members. Other concert credits include Mahler’s Des Knaben Wunderhorn, Fauré’s Requiem, covers of Vaughan Williams’ Mystical Songs, Brahms’ Ein Deutches Requiem, and his debut at age 19 in the Courcelle Requiem Mass with the Orchestra of New Spain. He also has appeared in solo recital with members of the Fort Worth Symphony and Dallas Opera Orchestra, as well as in the finals of the inaugural Boulder International Voice Competition with the Boulder Symphony under the direction of Maestro Devin Hughes.